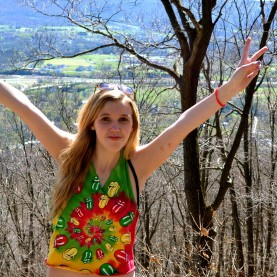 Liz is currently a junior majoring in print journalism and minoring in women’s studies. She's a lover of Chipotle and she needs to eat a burrito at least once a week to feel complete. You will never see her without her headphones in her ears. Liz is usually listening to Sublime, Electric Guest, or Pretty Lights.

You’ve probably already begun to brighten up your wardrobe for Spring. Now, do the same with your make-up palette! Here are a few of our favorite eye-shadow shades of the season.

Dreary-eyed students wait in line at Irving’s, wearing headphones to tune out the noise – their minds preoccupied with thoughts of exams and papers. Expecting typical service and a bland greeting at best, students are surprised to find that today they are not just a customer – they are each a “glam goddess.”

Want to throw a “Game of Thrones” viewing party that would make even the House of Stark proud? Now you can with XFINITY4College Game of Thrones giveaway.

The Las Vegas-based indie-rock band will take the stage at 8 p.m. on Feb. 20 in Alumni Hall in the HUB-Robeson Center to celebrate Founder’s Day.

Eric Faust and Mike D. Mulligan, members of the indie-folk band, “Lenina Crowne,” started collaborating together by goofing around in East Halls, creating home music videos and sharing them with friends.

When Sharleen Chidiac is on stage performing her original music, she said she feels “frazzled,” but in the “best way possible.”

Valley had the chance to speak with Adam DeVine, one of the writers and actors of the hit Comedy Central television series “Workaholics,” in a phone press conference open up to college media outlets. The show follows the lives of Blake (played by Blake Anderson), Anders (played by Anders Holm) and Adam as they are on the verge of becoming adults. The season premiere of “Workaholics” will air at 10 p.m. tonight.

With an abundance of snapbacks, sports t-shirts, Timberlands and jeans walking around Penn State’s campus, men might wonder how they can stand out. Here’s a closer look at how guys can add some variety to their wardrobe.